Uniquely You is a subscription box with a difference from the normal ones.  They tailor each box to you personally so each one is different from the next.  When you sign up they have 20 categories you can choose from to base your box on.  They also send you a little quiz after to get to know you better filled with some serious and some frivolous questions.  I chose the Mystery Box category and after filling in my quiz they responded and asked if there were any of the categories I did not have any interest in. I told them that Festivals & Party Supplies, Men’s Fashion Accessories, Cats, and Smoking Accessories were not to my interest and they said nothing from those would be sent.  Boxes are $29.99 a month but go down a lot if you choose a longer term.  All pricing is in Canadian dollars and the box is based out of British Columbia. 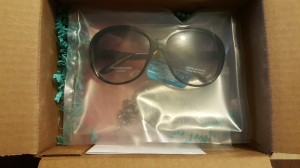 The outer box is just a plain brown box but opening it up showed that it was carefully packed.  Under the paper was my stuff, carefully and individually packed in air bubbles.  There is not an info card with this one so you don’t know what you’re going to get until you unpack it.

First out were a pair of sunglasses.  I think this is the fourth pair of shades I’ve received from boxes this summer but considering how often I lose or break them, that’s not a bad thing.  These are huge and not really working for me but I’ll toss them in the car and at least have them in a pinch.

This broach is stunning!  I don’t have any broaches and will probably end up waiting until fall to use this on a sweater but I love it and think it’s very beautiful.  It’s quite heavy and seems well made as well.

This is another broach but it has both the pin and a clip so you don’t have to pierce delicate fabrics.  I like this one as well and think I could even wear it in my hair.  The neutral grey colour means I can get lots of matches with it. 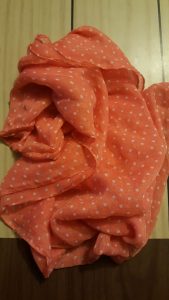 Next out of the box was an infinity scarf.  It is not quite orange but not quite peach either with white polka dots.  It is longer than some of the other ones I have and settles nicely around my neck.

Last out was a chain headband.  I have a few of these but none that have anything that hangs down like this one.  It makes me feel like a princess but I’m not sure I could wear it to work or even just out.  It is really more of a festival or beach look.

This month was way better than last.  It seems like there might have been a bit of a summer/beach theme going on and everything was an accessory.  I’m glad they upped their game from last month because I’d have been so disappointed to get a jumble again.